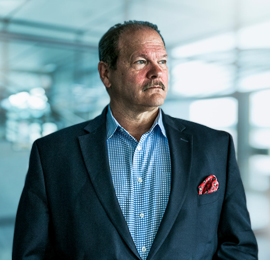 Mr. Goldenberg is Chairman and President of Cardinal Point Strategies and a member of the U.S. Department of Homeland Security Advisory Council (HSAC).

In December 2014, DHS Secretary Jeh Johnson appointed Mr. Goldenberg as co-chair of the National DHS Foreign Fighter Task Force. He currently serves as Vice Chair of the US Department of Homeland Security's Faith- Based Council and as senior advisor to the Department’s newly established CVE initiative.

Before founding CPS, he played a key role in setting domestic and international policy for the legislation and investigation of hate crimes and countering violent extremism and has been an international thought leader in information sharing, conflict resolution, public safety and counter terrorism policy. He established community policing, hate crimes, and CVE related programs for transnational agencies, many of which were adopted by governments in North America and Europe. His public career includes more than two decades as a former senior official of the New Jersey State Attorney General’s Office, Director of the nation’s 6th largest county social service and juvenile justice system, and as a law enforcement official who headed investigation efforts for significant cases of domestic terrorism, political corruption, and organized crime.

Following a series of highly publicized incidents of domestic terrorism and hate crimes, the NJ State Attorney General appointed Mr. Goldenberg as the first state Chief of the Office of Bias Crimes and Community Relations. During his tenure, he wrote many of the model procedures for domestic terrorism investigations and policy framework for building police and community partnerships, many of which became models for national and international policy and legislation.

In 2004, he spearheaded an international law enforcement mission for the Organization for Security Cooperation in Europe (OSCE), during which he worked in over 10 European nations including Ukraine, Hungary, Kosovo and Croatia where he assisted government agencies with addressing conflict and growing transnational extremism. He continues to remain active in the non-profit and think tank communities.

His current and former leadership positions include: Special Adviser to the Chairman of Crime Stoppers, USA, the County Executives of America, representing 700 of the nation’s largest county governments; Senior CT Advisor to the American Hotel and Lodging Association, representing over 50,000 hoteliers here and abroad; Vice Chair of the US Department of Homeland Security's Faith Based Advisory Security Council; as well as National Director of the Secure Community Network, the nation’s first full time faith based threat and information sharing center. He also sits on the Board of Directors for several publicly traded and privately held companies. Mr. Goldenberg has received numerous awards including South Florida’s most distinguished citation for valor, Officer of the Year. Goldenberg spent 4 years long term undercover as an agent assigned to the South Florida Special Investigations Strike Force. His experiences have been featured in numerous articles and publications.